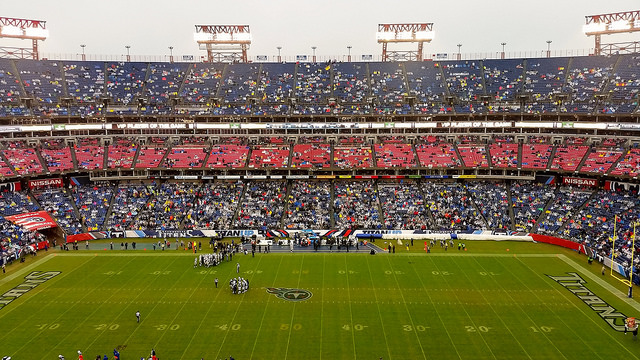 Southwest came through big again, as I found direct flights that were way cheap for flying out the weekend after Thanksgiving from Cleveland to Nashville. My mom dropped me off at the airport and I was on my way. This was my first visit to the Music City and I had high hopes for it. I love the show and country music, plus I’ve never heard anyone say they’ve had a bad time, so expectations were high. The hostel I was staying at was right on the river looking out at Nissan Stadium and was a five-minute walk to Broadway St. I got ready for the day and set out to find a spot to watch The Game. It was early and most of the bars were closed. Eventually, I found an open one and quickly found myself in SEC country. The manager of this bar was a Bama fan and could not be a bigger stereotype of the arrogant SEC fan. There was a table of assorted SEC schools and they were cool, but this guy was so misinformed and argumentative that I was darn near losing my cool. I just wanted to watch the game, but this dude was in my face. He even turned the game off with a minute to go so I couldn’t enjoy the ending. I should’ve left at halftime to find another bar, but the bartender was actually really nice and I just wanted to watch my Buckeyes take it to the Big House and DESTROY Jim Harbaugh’s Wolverines. Probably a little too late to make the Playoffs, but I’ll take that win any day.

It was a rainy, dreary day on Sunday, but I got ready and walked across a bridge to the stadium. Being able to walk to a stadium is a very nice advantage. No hassle with parking or public transportation! They just changed the name over to Nissan Stadium from LP Field and it’s so fresh, even Twitter still calls it LP Field in its geographical tag. There are cars on display all over the place as I did a loop around to survey the tailgate scene. Not much going on in these lots as the Titans are playing poorly and it was cloudy. There were some people out barbecuing and I noticed Raider fans were taking over. They were here, loud, and in full costume. I love the way their fans dress up all tough, but after my visit to Oakland, I know they aren’t nearly as scary as they come off! As there was nothing to do around the stadium, I entered and walked down to the field to have a look around. Not many people were watching the teams warm up, but there were significantly more fans on the visitor’s sideline. The Titans were another team that hadn’t gotten back to me about a team witness and I needed to find an usher to vouch for me and set off to find someone. It felt like this stadium didn’t have many ushers, or they really did a good job at blending in. I walked through a few sections of the lower level not seeing anyone. Finally, in the north end zone, I came across Casey with Fan Services who would do the honors.

The end zones of this stadium only have lower bowl seating and house large scoreboards on top of a cute line of concessions made to look like a city street. This one also had an elevated stage for live music performances and currently had a couple of cheerleaders getting down. The end zone concourses were very wide and also had picnic tables and the only standing room areas available. Once under the stands on either sideline, the main concourse was a split, but still very open. Décor was sparse in here, just pictures of former players wrapped around concrete pillars and banners with various fans. Someone mentioned that Eddie George used to have a large picture on the side of the stadium, but I was disappointed to find a small photo of him at the end of the sideline concourse. In my opinion, he needs a nice statue!

I made a full circle and found myself in the south end zone near kick off time. I was taking some pictures with the field in the background when a Raiders fan asked where I was sitting and if I’d like to sit with his family as they had a no show and an extra ticket. They seemed like a fun group, so I joined them and quickly found out they were Alabama fans as well. These people were a complete 180 from the guy I had met the day before and I think a reminder from God not to judge a fan base off one bad experience. They were kind, funny, and very passionate about the Raiders (and Amari Cooper- a WR from Bama). I was so glad they had decided to extend the empty seat to me, despite my apparent fan allegiances. For this game, I was wearing a denim shirt for the Titans and had an Ohio State beanie on knowing it would rain later. We all agreed that we would never want to be the reason why someone chose to hate a particular team.

Game time hit and Nissan Stadium was empty! This was the smallest crowd I’ve seen all season and a good deal of it was pulling for the Raiders. There was even a mini Black Hole forming below me in the south end zone. The team came out to more cheers than boos I think. The Titans came out to some sweet pyrotechnics and after their introductions, there was a very quick stabbing of the field with a sword. It reminded me of the USC Trojans’ tradition, but I like that the team uses it to honor someone who’s inspiring others. This week’s 12th Titan was Inky Johnson. Once the game started my new friends got loud in their support of the Raiders. I remained neutral and enjoyed both team’s offensive drives, though the touchdown celebration for the Titans is mega weak. All it is is some of those loud fireworks that stadiums usually fire off during the “bombs bursting in air” line of the national anthem (seriously, EVERYONE does this). I guess you have to have a winning season down here for a decent celebration. Tough crowd, well front office I guess. There were Titans fans next to us and they engaged in some back and forth, but in the end, both sides agreed that it was all in fun. Their logic- neither of them were being paid to be there, thus had no real reason to take any of it too seriously. These were the most chill and logical fans I’ve sat by in all my visits… and they were drinking on top of that. Color me impressed.

At the half, we were treated to a live music performance by an up and coming country artist Clare Dunn and the rain that was being forecasted finally hit. I decided this was as good as any time to explore the rest of the stadium. The concourses were packed with people seeking shelter from the storm and I looked for options to get to the upper level. I didn’t see steps, but there were long ramps along the outside of the concourse. The wind was blowing the rain into them, so I opted to take the elevators instead. They run up and down all game and weren’t very crowded. The upper concourse was narrow and they hadn’t bothered to spruce up this area at all. All it was was concrete, but it did open to what would be great views of the river and city skyline if it wasn’t foggy from the rain. I walked out to the stands and watched some of the third quarter from the section openings trying to stay dry. A Titans fan offered me up a rain poncho which I really appreciated as I had dumbly forgotten mine in my suitcase at the hostel. She was a life savor! Now repellent to the rain I could go back down to my seat in the uncovered end zone and enjoy what was becoming quite the game between these two teams.

Another game lost due to a defensive penalty! There’s nothing worse than having a game wrapped up and someone doing something dumb to give the other team another shot. I had seen this in Baltimore and now I was seeing it again in Nashville. The Titans fan next to us had said, “Bad teams lack discipline” and he was correct, though I think he wished he wasn’t. He had used that statement against the Raiders earlier and it was ringing true for his team now. With a fresh set of the downs, the Raiders scored and got the win. I said goodbye to my friends and went to find Casey. For some reason I got way turned around and had the end zones confused I thought he was in the north, but then went back to the south, only to see him across the field. I hurried back over, cursing myself and being very thankful he had said he was there until an hour after the game. Sometimes I second guess myself and this was one of those times. I suppose some extra exercise never hurt anyone. He signed my witness log and I went back to the hostel to collect my things and headed off to the airport. Game #29 was in the books and I was pumped up for my next game as it was at home and primetime. Monday Night Football between the Browns and Ravens- yes, please!

Remember I am raising money for the Ronald McDonald House in Central Ohio. Please donate by clicking here.

Special thank you to Casey for his time and assistance during my visit!